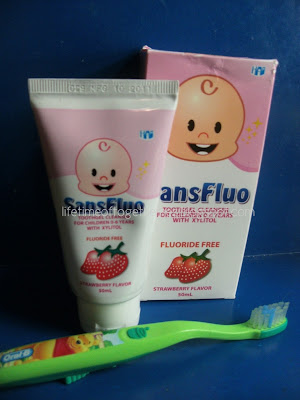 It's been weeks since we've been battling each other whenever toothbrush time comes up. I've been brushing Johan's six teeth since September but I was using a silicone finger toothbrush at first. It was not a big deal then, I can easily brush his teeth and finish in no time. But these past few weeks, he's been pretty stubborn and won't let me brush his teeth.

I changed toothbrushes when I noticed that he became interested when he saw me brushing my teeth and I thought maybe he's ready to have his own toothbrush. So hubby and I bought him an Oral-B Stage 1 brush. I didn't buy a toothpaste yet because I haven't researched on what's suitable for Johan's age.

At first, Johan is very cooperative but will eventually put up a fight against me and the toothbrush. I then bought him a tube of Sans Fluo toothpaste and was successful, initially. He love the strawberry flavor but as expected with most babies even toddlers, Johan usually just sips the toothpaste from his brush and again, won't allow me to brush his teeth.

It has always been like this for the past weeks which leaves me stressed out and Johan overly distressed. I don't want toothbrush time to be like this for him because I'm afraid he'll end up fearing the habit. I even downloaded tooth brushing videos and make Johan watch these before bath time so he'll warm up to the idea, but no, he just won't budge.

Now, I'm thinking of getting him one of those electric toothbrushes because I heard that it's easier to use and it cleans the teeth better than a normal toothbrush. I sure hope so.