A Weekend at the Valentino Resort and Spa

My sister, RK, turned 30 this year and she chose to celebrate her birthday with the rest of the family in a resort in Batangas. Too bad that the entire family cannot come to celebrate with us but nevertheless we still had loads of fun especially Johan who didn't want to leave the pool, ever.

Valentino Resort and Spa is located in San Jose, Batangas. It is a large resort with 4 swimming pools, a jacuzzi, basketball, tennis, badminton and volleyball courts, a fitness center, a children's playground, 5 huge villas that would fit a maximum of 8 people, rooms for two persons, dorm type rooms for larger groups, an event hall, a restaurant and a spa - yes it is that huge of a resort! 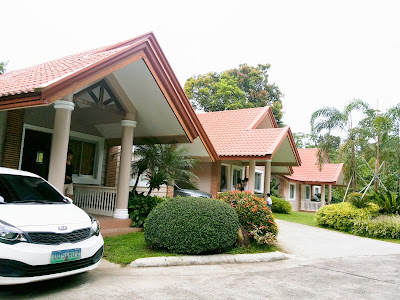 There were 12 of us that went to the resort plus 2 kids so my sister chose to rent out 2 villas next to each other to accommodate everyone. The Mediterranean Villa has two rooms with 2 double beds each. This villa can house up to a maximum of 8 people. The other one is the Contemporary Villa  which only has one room with a queen-sized bed. This villa can fit up to six people.


The villas are quite nice-looking with only the basic furniture inside. Downside is that there are no refrigerators in any of the villas and even the guests are not allowed to cook food. However, there is a restaurant inside the resort where you can order your meals and the staff are kind enough to let you store your food in the restaurant's fridge. 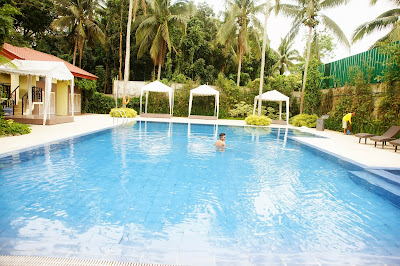 There are four swimming pools inside the resort, three of which are just a few steps below our villa and the other one is located a few steps from the entrance to the resort. The Jacuzzi is installed at one corner of the Infinity pool and this is where we stayed until 12 midnight of November 23. Johan enjoyed the kiddie pool and even if he went under the water more than a few times, he still stood up, "swam" and had a great time! 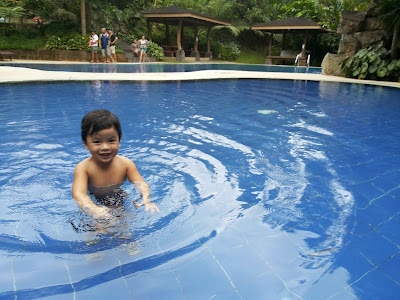 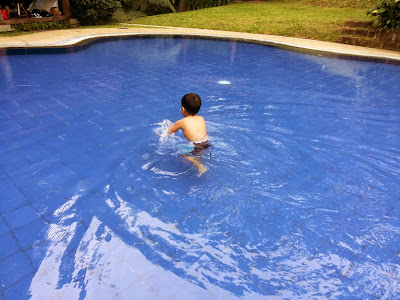 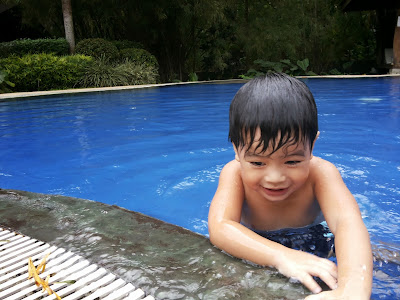 Other facilities include an indoor basketball court, a fitness center, volleyball and tennis courts and a spa. Too bad that Papa didn't bring with him his rubber shoes and his tennis rackets, he would have enjoyed playing tennis here. The boys wanted to play basketball but the court rental is quite steep at 400 if you'll be playing during daytime and 600 if at night. 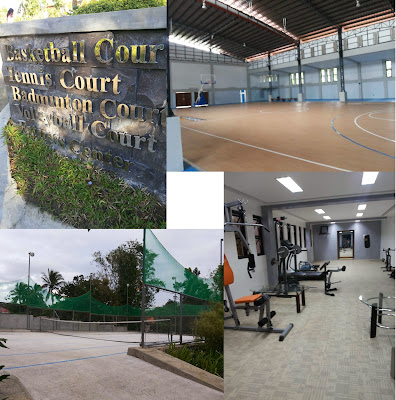 So we just settled ourselves in lots of picture taking, swimming and hanging out at the villa. Thank you to that person who invented the camera timer - we were able to take pics of everybody! 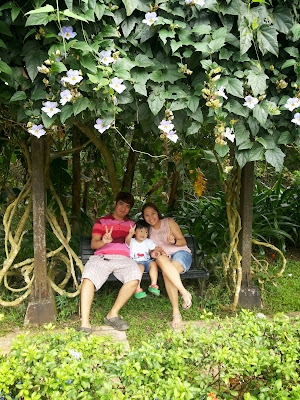 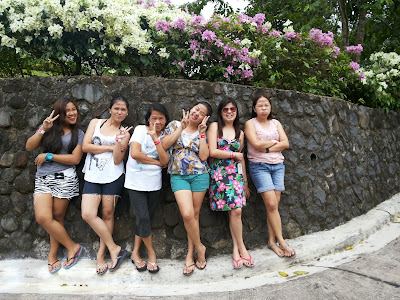 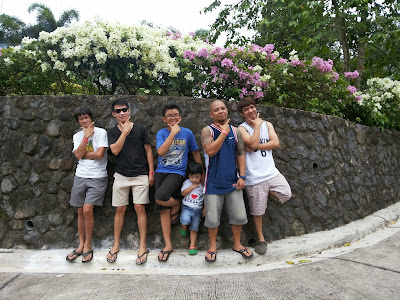 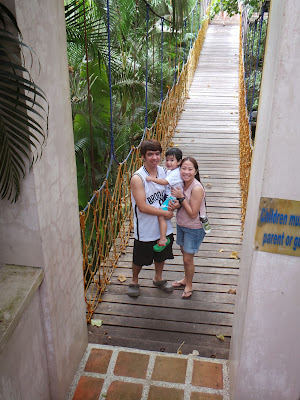 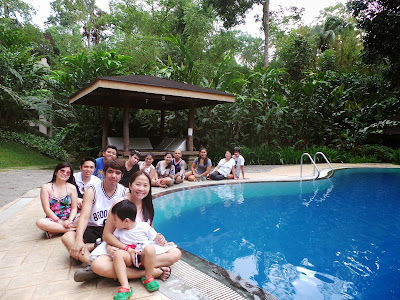 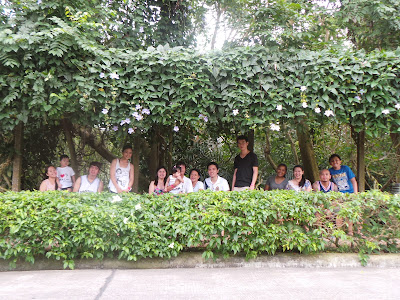 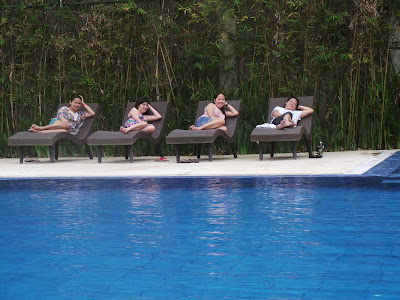 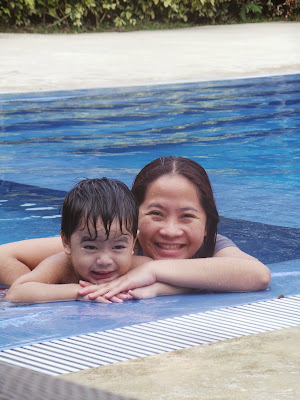 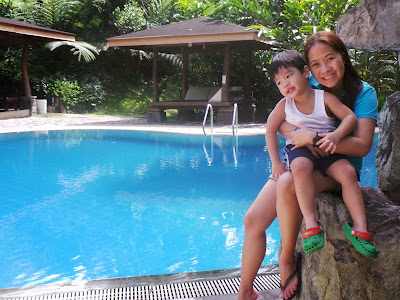 It was a great almost 2 day stay at the resort and everybody sure had fun especially Johan who didn't want to get out of the pool. Hopefully, we can come back to this place soon. 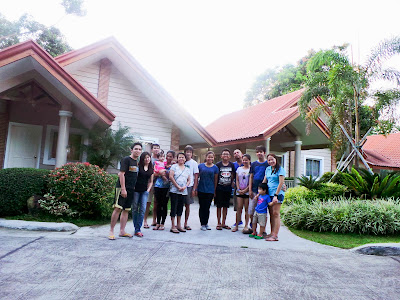 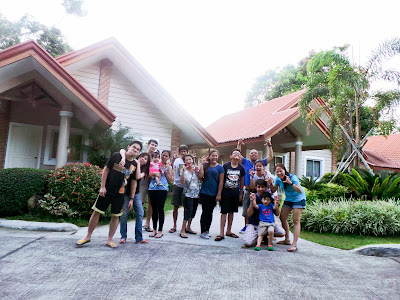 At first, I thought we won't be participating in the Trick or Treat event of Convergys, Nuvali where my sister is working. This is because the event was scheduled at seven in the morning and coming from our house in Dasmarinas, Cavite would mean that we have to get up at dawn just to be able to make it on time. But a few days before the event, I found out that we have to stay with my parents in Binan, Laguna and since it is much closer to Nuvali, I decided to have Johan signed up for the Trick or Treat.

Given that I only had a few days to think of a Halloween costume, I wasn't really prepared unlike last year where I was able to come up with a Russell costume complete with all the badges and scarf. So, I searched at home for possible costumes and I was lucky to find a Batman costume handed down by Johan's cousin.I felt even luckier that the costume still fits my son!

We just have to repeat over and over, "Wow, that's cool!" and "Wow, you look reaally cool!" just to make the boy wear his costume for a long period of time. And the "pang-uuto" eventually paid off!

Johan loved his Batman costume! His mask was a little bit tight but he still wore it.Anyway, do you see the people seated in front of 7/11 on the photo above? As we were passing by those guys said, "Wow, it's Batman!", raised their hands and high fived my son.I was just so proud that Johan was feeling friendly and high fived each one of them! 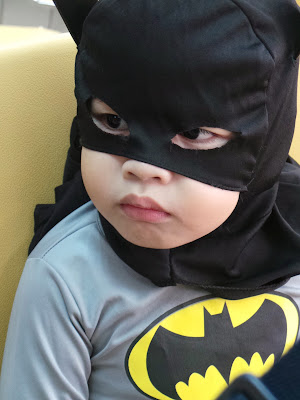 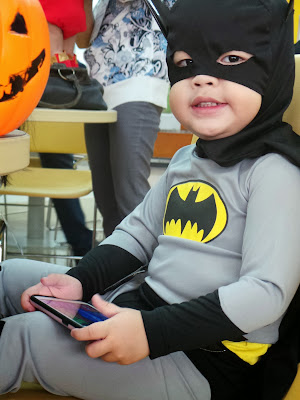 I thought his friendliness would carry out until the event was over but I was mistaken. As soon as we went up to my sister's floor and Johan saw the crowd, he wailed and wanted to leave. Good thing, a little convincing and permission to play with my phone made him go inside the pantry and stay.

I was getting pretty stressed out with Johan's screaming and I had to count 1-10 plenty of times to keep myself from screaming too. He just calmed down when we went to the Temple Run and Despicable Me stations, both of which had apps on my phone that he is really, really fond of.


I guess, everybody was happy when the event was finally over. We stayed awhile in Nuvali while waiting for my sister to finish some of her tasks at work and we had plenty of time for photo ops. We weren't able to hang out at the fish feeding area anymore since the event finished nearly lunch and it was already too hot outside.

Oh and by the way, Johan's cousin, Zalia, won third place for her Hawaiian costume which me and my sister just made the day before! Woohoo! 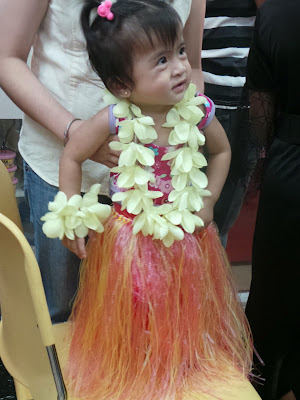 Tagaytay Meet Up with My Bestfriend

My bestfriend, Mhy, and I have been friends since college, so that's more or less 15 years of friendship. Sometime around 2005 or 2006, she decided to go to Singapore for work and we've seen each other less since then except for the infrequent trips home she made each year. We did have disagreements in that 15 years, most of them petty but we share some things which I think are cool - like we're both the eldest, we're both born on the month of January, even our kids share the same birth month and year of October 2010 and the best thing of all, my husband, Deck, and Mhy's husband, Bong, are friends with each other as well way before we were all married. And that makes meeting up all the more fun!

This year, Mhy decided to stay home for good. She arrived from Singapore earlier this month and it was only yesterday that we both found the time to meet up. They wanted to do a break-in of their brand new car and they decided to head to Tagaytay and who am I to say no?

We chose to go to Bag of Beans as Mhy's family already had lunch and were dying for some desserts. Bag of Beans' Blueberry Cheesecake is the best especially if paired with bottomless Kapeng Barako that's why these two are my usual order whenever we visit Tagaytay. 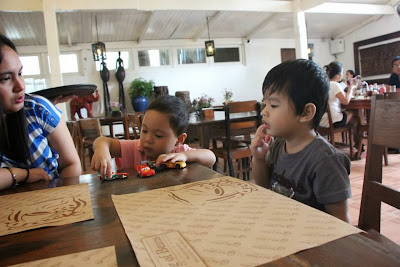 Ethan, Mhy's son and Johan sat beside each other the entire time, played with Ethan's toys and shared a plate of Bag of Beans' Funny Face. 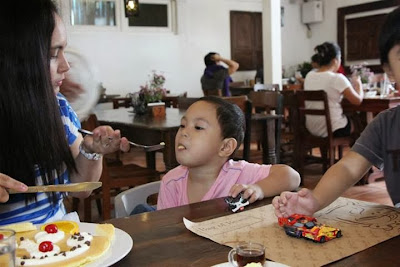 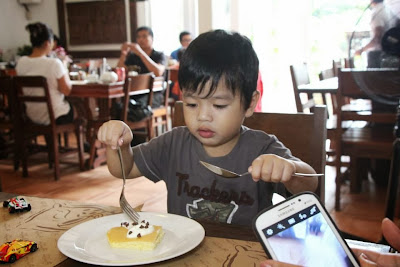 It's heartwarming to see these kids get along with each other. It has been my dream for Mhy's kids and my own kids to be friends and get along within themselves as Mhy and I have been to each other. Now, if there's something else that makes me happy aside from that, it's watching these two goof around and rekindle their own "relationship" with each other. 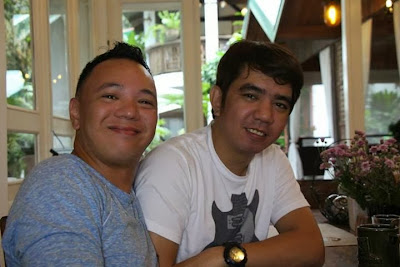 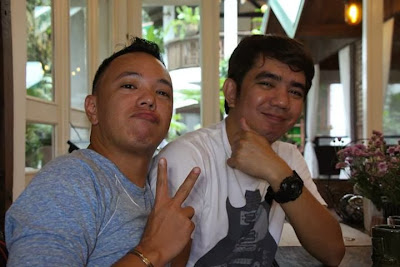 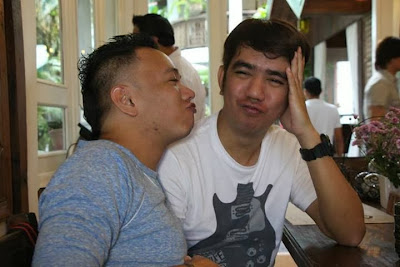 If they had a moment, Mhy and I made sure we had ours as well. 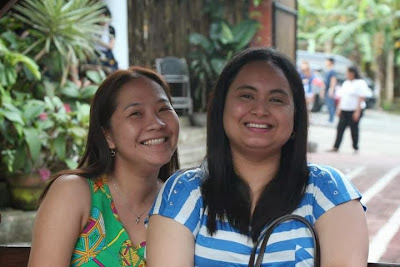 And then these two adorable little boys had their turn in front of the camera. 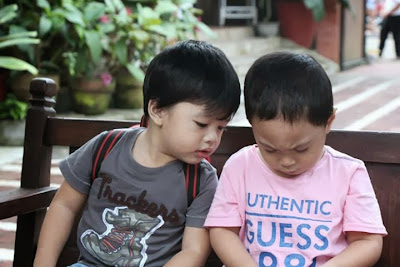 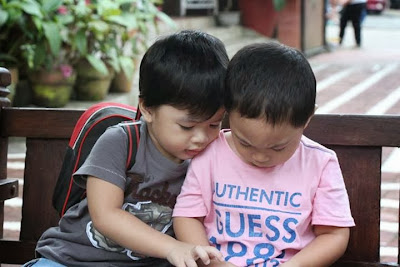 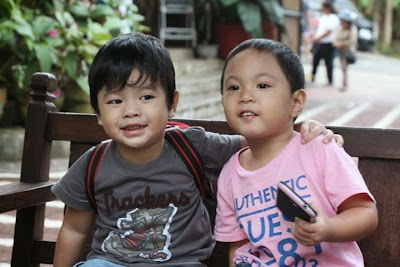 Melts my heart each time and I really, really hope they'd grow up to be very good friends like their moms and dads.

It was just a short trip but it's more than enough for all of us to meet and have a great time.