Johan has been looking forward to Halloween eversince we introduced the concept of Trick or Treat to him when he was two years old. I was inspired on his first Trick or Treat event that I DIY-ed his Russell, The Wilderness Explorer costume.

Over the years, he dressed up as different characters for Halloween. I would like to think that he enjoys dressing up as much as he enjoys getting all the treats. 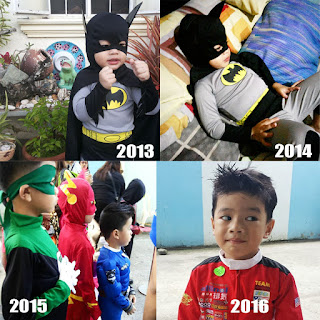 Prior to Johan's birthday, I asked him how he wanted to celebrate. Johan said he wanted a swimming party at the beach. I thought we could go to Boracay but told Johan that if we are to go to the beach, it will be just the four of us since it's going to cost too much if we are to bring mine and hubby's immediate families with us. Johan, who enjoys the company of our immediate families, then said that it's okay to just swim at a pool instead of the beach so we could invite his cousins to join us.

Then I thought I am going to surprise him. So, I came up with the idea of telling him that everybody had to go somewhere on the day of his birthday and we didn't save enough for a party. Now, usually most kids will throw a tantrum and insist on a party but not Johan. He told me it's okay if we won't have a party, that it's okay if we'll just go to SM, eat at McDonald's and let him and Jeron play in Kidzoona for two hours. Ang bait lang, di ba?

This is more of a surprise birthday for Johan but since the boys have the same birth month, we decided to celebrate Jeron's birthday as well. I had two cakes made for the boys, a Minecraft themed cake for Johan and a Superhero themed cake for Jeron. My sister made Chocolate covered Oreos with the same themes, decorated the venue with balloons, I made masks and C2 bottle covers and my bestfriend bought paper plates with Minecraft and Super hero designs.

A year ago, my cousins and I planned a trip to Kidzania Manila. Everybody enjoyed the experience, even the adults so we planned another trip this year and hopefully it will be an annual bonding thing for the kids and us.


This year, my husband wasn't able to come since he had to stay home with Jeron, who is still too young for Kidzania. So, Johan and I rode a van to Alabang to meet up with my cousin's family and we all went together to Kidzania.