Since I'm going to start a new job by February, I need to update my IDs and complete the pre-employment requirements given to me by the company. My NBI Clearance expired last year so I need to get a new one and my SSS ID still bears my maiden name and although it is not required (yet) to get the new digitized ID, I decided to get one just to have my name changed.

I researched online days before on where to get these requirements with the possibility of shorter lines and less number of applicants. I hate waiting in line for hours. The closest NBI Clearance Center to me is Alabang and I heard from my brother that for me to be able to get a number, I have to be there as early as 3 am. WTH! I am not going there at three in the morning and just how will I do that? So, I researched more and I was told that the NBI Satellite Office in Tagaytay City has less applicants and that the process will only take a short time.

Short time for me is like one to two hours max. I didn't know it'll be four hours. Well, it's way better than waking up at dawn just to get a number at 3 am, right?

Here's what transpired yesterday when I went to Tagaytay City to acquire an NBI Clearance and SSS Digitized ID:

8:30am - my mom and I arrived at NBI Tagaytay
If you're commuting from Dasmarinas, Cavite like we did, you only have to ride a bus or a jeepney with a sign board stating Mendez/Alfonso or NBI. We took the jeepney and the fare is 35 pesos each. When we arrived at NBI, the guard told us that they already reached the maximum number of applicants for their first batch, I was then given a form with a number and was instructed to return at 10am. So as not to waste time, my mom and I decided to go first to SSS and apply for the digitized ID.


8:45am - my mom and I arrived at the SSS office in Olivarez (Tagaytay)
I would have to commend OIC Victorina G. Carlos of SSS Tagaytay Branch for having such respectful and well-trained personnel. From the security guards who assisted everyone in a courteous manner to the lady handing out forms to the cashier and to the man taking the picture - the process was very swift and systematic. I was done in 30 minutes. There is a PhP 300.00 charge to get the new digitized ID though and there was no specific time frame as to when it will arrive. But the very attentive, respectful employees of this SSS branch and the quick processing of my documents make the taxes I paid and will be paying worth it. I wish all SSS branches and government offices, at that, have employees and system such as theirs. Kudos to you, SSS Tagaytay Branch! 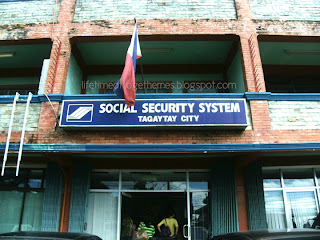 9:30am - we arrived back at NBI Tagaytay
We were ushered in and made to wait in an open court area with dilapidated galvanized iron sheets or yero (see picture below). The process was fast at first. When we arrived, the last number called was 210, I was 326. They were calling out batches of 10 numbers in 10-15 minutes. We thought I will be done the entire process by noon. Wrong! As the time passed, they were calling out lesser and lesser numbers and my number was only called out by 12:07 pm. I was then made to fall in line along with the others for the payment of PhP 115.00 for the NBI Clearance. I arrived at the cashier window by 12:59 pm. Fell in line again for encoding which finished at 2:00 pm. Fell in line again for bio-metrics and was finally done by 2:30 pm. I would have sucked up to that more than four hours of waiting in line if not for those two girls who cut in line just because THEY KNEW SOMEBODY FROM THE INSIDE . Their numbers were 391 and 392. I was 326 and was waiting in line since 9:30 am whereas they, who just arrived, got to be processed ahead of everybody just because THEY KNEW SOMEBODY FROM THE INSIDE. And the oh so wonderful people working in NBI Tagaytay, paid no attention to everybody else's complaints, because those girls KNEW SOMEBODY FROM THE INSIDE. To make things worse, I was not able to get my NBI Clearance yesterday and would have to return on February 3 to pick it up. What a waste of an entire day.

Another thing, if we can't have the entire system improved and make everything computerized/digital, please, please, and this goes out to all government offices where everything has to be manually typed into the system, hire people who can type fast and makes use of all fingers and not hire people who only uses two fingers when typing. This will definitely make everything faster and will not waste everybody's time.


What made the experience less damaging was the Tagaytay climate. That's one thing that I am happy about my decision of processing my requirements there. My mother and I were happily chatting in the chilly Tagaytay air unlike when you go to government offices in Manila where you will have to wait under the scorching sun or in an office with the airconditioning unit broken down. We, at least, got a breathe of fresh air, literally. Even if we were not able to go around Tagaytay, as initially planned if I finished early, my mom and I still got to bond by exchanging stories. We were also able to enjoy a huge, hot pot of Bulalo from a roadside restaurant in Mahogany Market before heading home. 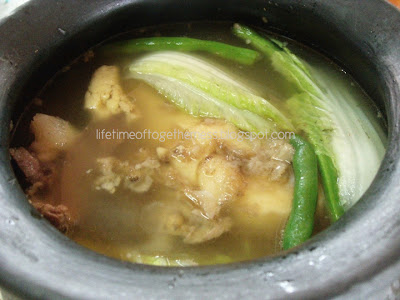 Thank you so much for this timely post, I too needed to renew my NBI Clearance and replace my SSS ID to reflect my married name. I'm changing employers and will start also on Feb. Just to clarify your SSS ID is for a new one, I wonder if Tagaytay branch will entertain for replacement?

Mine is also for replacement, I mean, I applied for a new ID to reflect my married name. I assumed SSS will be providing the New Digitized ID to everyone, whether new ID applications or replacements. I hope that clears things up. Thanks for visiting my blog! =)

good thing , i don't need an nbi clearance now a days, hopefully you can join my giveaway too.

I'm officially resigned, yesterday was my last day with my employer and will be starting on the new employer mid-Feb. I have a few days to do the paperworks and rest, Yey! Anyway, just a follow up question about the replacement. I read in another blog who replaced her ID at Diliman branch that her existing SSS ID was retrieved stapling it to the E6 form.

Ganon din ba yung ginawa sa current ID mo in Tagaytay? Considering the waiting period for the new SSS ID to be mailed, sayang kse not to have the current one on-hand medyo malaking pakinabang kse kahit maiden yung nakalagay. Thanks in advance dear on your reply.

Yes, they also took my old SSS ID. I guess you should expect the same in all SSS branches.

Good luck to both of us on our new jobs!

Thanks dear, I processed mine yesterday.