Hubby and I didn’t want to have kids as soon as we got married. Even if we were together for eight years before tying the knot, we felt like we still want to enjoy each other’s company a little bit longer as a married couple with no kids. We got to do just that until we found out I was pregnant on February 8, 2010, exactly nine months after getting married. 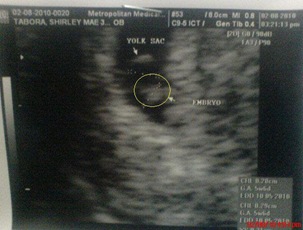 Johan’s first ultrasound
It was not an easy pregnancy for me, I was vomiting most of the time, I can’t eat anything nor can I drink water as it tastes bad for my over sensitive taste buds. I had subchorionic hemorrhage on my 2nd month and was put to bed rest by my OB Gyne when I had contractions. I was on bed rest for a month and my company was kind enough to allow me to work from home. Eventually, though, I had to resign from my job because my pregnancy is making my GERD and Asthma worse. I was on constant antibiotics and steroids just to prevent any asthma attacks. 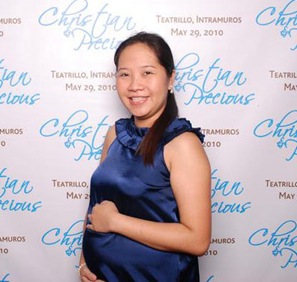 Five months pregnant at my friend's wedding
Everything became easier after my first trimester. I was able to go out of the house and meet up with friends at the mall. I even attended a friend’s wedding in high heels! Hubby and I would constantly go out every weekend to spend some quality time together before this little one comes out to change our whole life. But, we have to change the venue of my maternity shoot from Nuvali, Sta. Rosa to nearby San Miguel by the Bay because I was having premature contractions again at seven months. 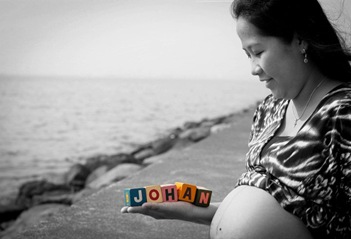 My maternity shoot at 7 months pregnant
October 4 was the due date given by my OB based on my ultrasound results all throughout my pregnancy. Exactly on that day, at 3 am, I felt my water bag broke. We went to the hospital  at around 5 am because I waited for contractions to begin before we left the house. I was in labor from then on until seven in the evening. That’s 16 hours of torture! My cervix never dilated from the 4cm mark the entire time that I was in pain so my OB decided it would be best to undergo a CS delivery instead. 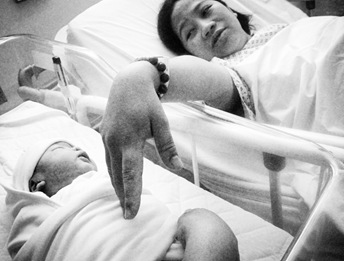 As expected, our lives changed drastically upon his arrival. But, everything changed for the better and we could not feel more blessed with Johan’s presence that completed our small family of three.

having a baby is such a blessing..

having a baby is indeed a blessing..

Hope you can come and visit my MM: Preggy Tale too.

I love your pregnancy photos.

PS.. May I invite you to join Nostalgia? It is every Thursday sis, you can read it at my MM post.

Oh ... I love your maternity picture ... holding those blocks is a really cool idea

Lovely photos! Here's my MM . Hope you can also join Messy Go Round . Thanks and see you around.Happy Mother's day!

We all have our own stories to tell, but we all have one thing in common. We're lucky and blessed to have our kids in our lives. Happy Mother's Day! Here's my MM entry: http://www.pensivethoughts.com/2011/05/mommy-moments-preggy-tales.html

same here, girl! i had difficult pregnancies that i requested for tubal ligation after my third child was born, lol!

a visit from Kimmy!

what a journey! everything is worth it, once we see our babies.. thanks for sharing your story with us!