We didn't end up in Tagaytay, after all. We chose to celebrate the day with a movie date, lunch and lots of quality time together.

After reading many great reviews of the movie The Avengers, we decided to watch the movie in 3D in Alabang Town Center. We arrived early around 11am to purchase the tickets and to be able to reserve seats of our choosing. After which, we just strolled along the mall, looking for things to buy but sadly we didn't find anything we liked.

Since we both had breakfast at home we decided to just have lunch right after the movie, we only bought a couple of Hokkaido Milk Teas from Serenitea and a couple of hotdog sandwiches from Smokey's to bring inside the cinema. 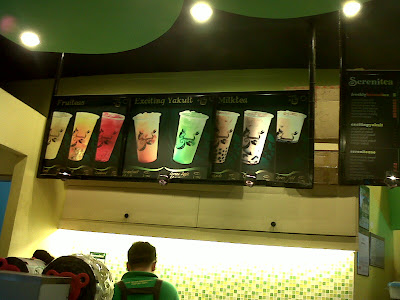 By 12:15, we're already in line for the screening and exactly 30 minutes before the schedule, a cinema employee announced that the 3D screening of the movie was cancelled for the day because of technical problems. Such a disappointment, especially since it'll be the first time that hubby and I will be watching in 3D. Yep, we're 3D virgins! Haha!

Anyway, after hearing the announcement, we immediately went back to the ticket counter to have our tickets exchanged to a regular movie screening which was at 1:45pm. Sadly though, there weren't much seats available and I was only able to get us two seats at the far left side of the cinema, five rows down from the screen. We were that close! We were scared we won't be able to enjoy the movie but surprisingly we did. Yes, The Avengers is a great movie and it's worth every cent.

After that, we were supposed to go to PF Chang's to have lunch, but there were a lot of people and we're already hungry given that it was already 4pm, so we ditched the plan of eating there. Where did we end up in? North Park!

We're both craving for Chinese food and North Park is the closest we could find to silence our rumbling tummies. While waiting for the food to be served, hubby and I talked about a lot of things. How we are at work, our son, plans for the future. We even talked about having another baby. I opened up to him why it's hard for me to decide if I even want another child. I told him how traumatized I've been with Johan's birth and if I were the only one to decide, I would be more than happy to just have Johan with us. But, I tell him, it makes me sad to think that Johan will grow up alone, so I decided to give him a sister, not in the near future, of course, it'll have to be carefully planned like 3-4 years more.

Did you notice that I specifically wrote "give him a sister"? Yes, if ever I'll be having another child, the baby has to be a girl so I have an assignment - research on ways to choose a specific gender for baby. Is there any?

Oops, I got off track with the second baby thing. Going back to our anniversary celebration, we had our lunch of our usual order - Chicken Feet for appetizers, Yang Chow Fried Rice and Boneless Spareribs for the main and we skipped dessert because we're already full. We had the in-house special Lemonade and Four Seasons to quench the heat. 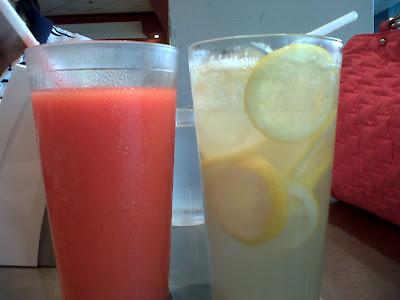 Our anniversary celebration might just like be any usual day but as hubby pointed out to me, it doesn't really matter how extravagant or how simple the celebration is as long as we're together, which is what really matters.

Happy Anniversary, dear hubby! Thank you for another wonderful year of love and companionship. Three years down and a lifetime to go!