Last Sunday during mass (I know, right?), Hubby and I got into a short conversation as to what kind of man Johan will be when he’s a bit older. Will he be an academic, like me, or will he be athletic, like his daddy?

Just a not-so-short backgrounder. I did a few sports in my younger years. I played volleyball during elementary in CSA, I took badminton during PE Class in college. However, sports are not for me. I hate it when I’m sweating, I hate it when I smell funny after a few hours under the sun. I was convinced that sports hated me too when I got a grade of 3 (75%) at Lawn Tennis, another PE class in college. It was only Physical Education, for goodness sake and I almost flunked it!

Hubby is the sporty kind of guy. Even if he’s not that tall (he’s only 5’6”), he is a good basketball player. I used to watch his games during college and I almost went up to a bunch of girls screaming his number to tell them to get lost. Yep, he’s that good that he had a good following of fans. He also plays badminton and though I never watched him play, I could say he does well at it after bringing home a couple or more gold medals and a 1st place trophy.

Academics, however, is a different story. I love studying, even the cramming during exam week. I thrive more during those wee hours of the morning when I get up, get my reviewer and study just a few hours before my exam. I believe that the brain can absorb more information when a person has just woken up because the mind has already rested, it’s like having the PC rebooted and then it runs a little faster. Hubby, on the other hand, well, the closest he got to being an academic was when he’s writing on this tiny piece of paper, hiding it beneath the cover of his scientific calculator and taking a peek at it during exams. Yep, he cheated sometimes during exams but never got caught.

So, now that we are parents to an adorable little boy, it got us wondering how we should raise our kid. I don’t want Johan to grow up to be an “academic-academic” kind of guy, I saw lots of them when I was going to school and I don’t want my son to end up like any of those guys - becoming a nerd with no social life at all. However, I also don’t want him to be entirely athletic, his daddy is a G-R-E-A-T example, I don’t want Johan cheating on exams just because he’s concentrating more in sports than in his lessons.

We’re not perfect parents and we don’t want to raise a perfect kid. We only aim to raise a well-rounded young man and like most parents, we’re constantly praying that we’ll be able to do our jobs and that is to raise our kid the best way we know how. 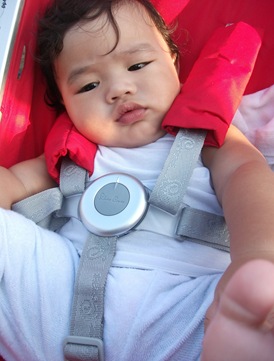 Email ThisBlogThis!Share to TwitterShare to FacebookShare to Pinterest
Labels: parenthood