As I've shared in my previous post, we were set to purchase an Altis from Dennis of Toyota. Our car loan application to PSBank was already approved and we even paid a certain fee to reserve the color that we wanted which was either black or medium gray. During this time, we were still waiting to receive a call from another bank, BDO, to know if our car loan application to their bank was approved as well.

If you're wondering why we applied for two car loans from two different banks, it's because PSBank is Toyota Dasma's affiliated bank while BDO car loan is the preferred bank of AutoTrust Philippines, a car financing company in Quezon City. 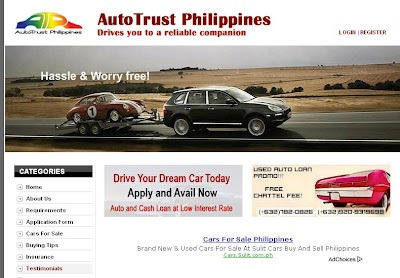 We chanced upon AutoTrust's Sulit ad and got interested in an instant. The SRP of the Toyota Altis is the same but they offer more freebies than Dennis of Toyota. We then inquired and asked for a quotation and it appeared that even if we have to pay the same amount of down payment, the monthly amortization is still lower by a few hundreds than that of Toyota's.

June 17, we finally received a call that our car loan from BDO was approved and almost at the same time, AutoTrust's agent France, told us that our preferred Altis in medium gray was already available and can be picked up the next day. Before making a decision, we sent a text message to Dennis asking if he can lower down the monthly amortization that he quoted us. If ever he can give us a closer amount to that of AutoTrust's, we'll definitely get from him. But, as I've said, it took him a day before he sent us a new quotation and it's still higher than AutoTrust. So, the decision has been made.

We initially planned on going the next day, Monday, but we decided to go on Tuesday instead because hubby still needed to open a checking account and I still have to secure a Certificate of Employment from my company.

On June 19, the three of us - hubby, myself and Johan - were on our way to achieving one of our dreams. We left the house early around 8am and met up with hubby's cousin who is a policeman, for security purposes, and my sister who wanted to take part in one of the happiest days of our small family.

When we arrived at AutoTrust's office, we were welcomed by a sad news. Toyota North Edsa didn't want to give us the 3 year LTO registration which was included in the freebies that we discussed with France. This is a huge setback because that meant another Php13,000 which we didn't want to shell out in addition to the 20% down payment that we'll be paying that day. Good thing is, France's boss, Alex, was able to talk to Toyota North Edsa and they agreed to include the 3 year LTO registration. France later on told me that Toyota didn't really agree and that her boss, Alex, shouldered the additional fee because he didn't us to back out of the deal and he was embarrassed that all this had to happen when we're already there and excited to pick up our new car. Now, if that's not great customer service then I don't know what is. Though, our deal with them is not yet done because we are to get our plate from them in a month's time. Hopefully, we get it by July.

All in all, it took us almost the entire day signing the paper works and waiting for the car to be ready for pick up. We had lunch at around 2pm in Hap Chan - SM North and passed the time until 5pm came and the car is finally ready. I would say that it was a very teary moment for me. I can't believe that we finally have our dream car.

It pays to dream coupled with hard work and double up with your prayers. God indeed is good.