After we made our hasty exit at the Penguin Talk Show, we walked around the park to see what else could be done inside. It is still a bit early and we have lots of time before the final show on our list which was the Musical Fountain Show which wasn't starting until 6:30 PM.

We decided to look around first before we enter the other attractions that we have tickets for.


Too bad our package didn't include the Trails to Antartica, it would have been great to see live penguins and to actually feed them. Well, there's always a next time, besides, the boy enjoyed running around the wide open spaces inside the park and had lots of fun pointing at the colorful lights installed on the floors and announcing each color out loud.

After we think we've seen all there is to it, we went down again and proceeded to the Jellies Exhibit. 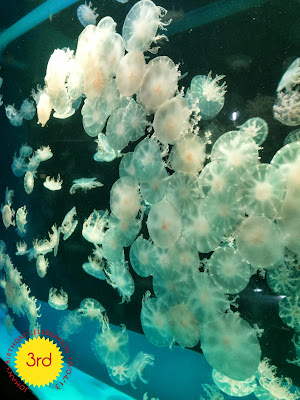 The highlight of the exhibit - the jellies reflecting the colors of the light as
it changes from color to color
Right after the Jellies Exhibit we then proceeded to the Birds of Prey Kingdom. I kinda expected this to be a big area full of birds but I was disappointed when we came inside and only eagles are there to be seen.

The Birds of Prey is just a small area, which is disappointing, but the eagles flying around and perched on the fences were a sight to see. The highlight of our tour here is when one of the staff approached me and asked if I wanted to feed an eagle. I hesitated but then gave it a go when the staff said it was for free (hehehe)!


It was scary because I thought all the birds would come to me would compete with the other birds just to get that piece of meat on my hand and only after the staff said that only one eagle will come to me did I began to relax a little.