Johan's 3rd Birthday at the Manila Ocean Park - The Shows

After having our lunch, we immediately proceeded to the area called Acquatica to catch the first show on our itinerary - The All Star Bird Show.

The birds were just awesome! They did tricks like shoot-the-ball, shoot-the-hoops, find the object and one bird even did math! The trainer wrote down 10+15 on a board and the bird would choose the answer from a set of numbers hanging on another board. It was amazing that the bird chose the number 2 and the number 5! The students watching with us cheered when the bird put 25 after the equation written by the trainer. Simply amazing!

When the show is over, we stayed awhile at the area thinking that it'll be the same area where the Sea Lion Show will be held, but upon asking, we found out that it'll be at the other side of the area so we immediately ran to the Marine Life Habitat to be able to get good seats for everyone.

The Sea Lion Show is a joy to watch! The Sea Lions are smart and their trainers are crazy-in-a-funny-kind-of-way people! There were lots of funny moments, especially the part when one of the trainers did "twerking" to the tune of  Gimme, Gimme and his Sea Lion mimicked his every move! Everyone is just laughing their hearts out - kids and kids-at-heart alike! If there is only one attraction that you would be visiting at the Manila Ocean Park - let this be it. Definitely worth your money!

Our next stop is the Penguin Talk Show which runs every thirty minutes so don't worry that you'll miss this. 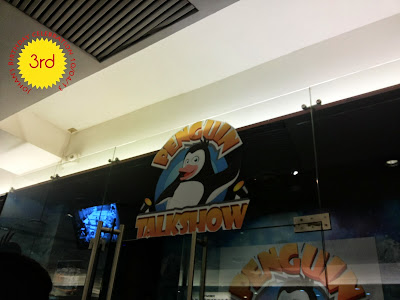 The Penguin Talk Show is definitely not one that young kids like my son would enjoy. We first thought that we'll be seeing a live penguin and a host will just be there to walk us through some trivia about them but we were wrong. There is only an animated penguin on screen that interacts with the audience. This show might be enjoyed by school-age kids. We did not last more than 10 minutes inside when Johan got bored and pulled us up to leave.

Next post will be about the other attractions at the Manila Ocean Park.Stay tuned!