Weekends are the only time I can actually cook for my son. I usually take the opportunity whenever it's just the two of us that's left at home because I get stressed out when hubby or MIL looks over to what I am cooking. I feel like I am being judged for my cooking inability. :)

So, yesterday when they all went to Manila and I chose to stay home with Johan, I looked at what we have in stock and cooked. 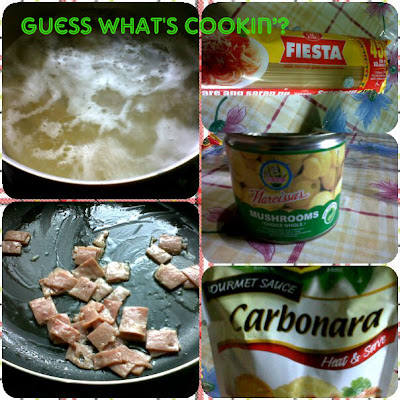 Yeah, I know, where's the effort there when all I really had to do was mix everything together. I chose to cook Carbonara since it won't take so much time, which I don't have given that Johan won't let me out of his sight for more than 5 mins. Plus, I don't get to eat this too often as the people I'm living with favors spaghetti over this dish.

When I was done, I was scared Johan won't like it since that'll be the first time he'll be having Carbonara. But, boy, was I surprised when he finished the entire plate I laid out for him and kept on pointing his finger at me, saying, "A best!" which translates to "You're the best!".

As evening came, something stressed me out too much I almost had an asthma attack. I had to get out of the house into the backyard to cool off and calm myself. When I went back in, I thought I needed comfort food.
So, I made this: 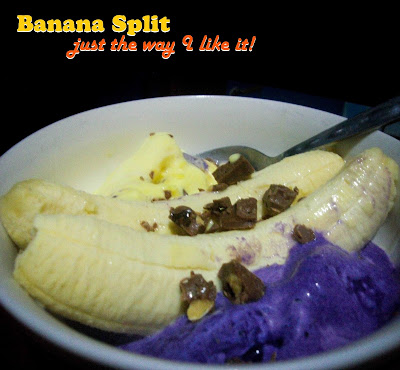 My own version of Banana Split had two Bananas, scoops of Ube and Cheese Ice Cream, Condensed Milk instead of Chocolate Syrup and chunks of Cadbury Fruit and Nut.

I was in sweet heaven! Comfort food did the trick and I was feeling a whole lot better when I finished the treat.