Yesterday was my last day at the office. I left not because I have found a new job or that I am not in good terms with my colleagues. I left because of health reasons. My pulmonologist advised me to resign due to the recurrence of my Bronchial Asthma and GERD or Gastroesopageal Reflux Disease. I should take a rest for at least a month while under medication or I should find a job that's on the regular shift (day shift).

I got the medical certificate of not fit to work on Saturday and since then I could not sleep. It was a very hard decision that needs to be thought over and over until I am sure that it is really the right thing to do. I am tempted not to tell my superiors about the doctor's diagnosis because I truly do not want to leave the company. Tuesday morning, after weighing the pros and cons and after much deliberation with my husband, we arrived at the decision that I should resign. Healthwise, it is the best and only thing that needs to be done.

I was supposed to go on shift Tuesday night, meaning I'll report at 9pm and leave at 5:30am Wednesday morning. But, while on commute, I had an Asthma attack and decided not to finish the shift and just leave when I'm done with the paperworks and the meetings.

I first talked to my Team Lead, handed over the medical certificate and my resignation letter. Tears started to flow. We talked and she told me that it's really a hard decision but I do need to prioritize my health over anything else. Then, she scheduled a meeting with our team. The one meeting that I fear the most as I know I cannot control my tears when I say "this is it for me". As expected, I cried as every team member gave messages of good luck, get well, we'll see you again and we will definitely miss you. It's really a sad moment for everyone because we, as a team, are a solid group and it's heartbreaking that one has to leave. We may have our differences but we try to work around them and find some things that bind us together. As we left the conference room, everybody had puffy, red eyes from crying.

I then met my manager and told him of my plans that I will take a rest first as advised by my doctor, he wished me luck and that he and my team lead will be there if ever I needed anything. I proceeded to the Human Resources Dept and asked for the necessary exit papers, decided to return next week to complete my clearance forms.

Then it is time to say goodbye.

I hugged my teammates, my batchmates from training, other team leads. It is really hard to say goodbye and I could not say the word. I stayed at BPSI for less than two years but it felt like I stayed longer than that. It felt like I've been friends with everybody for a longer time than those mere 17 months that we worked together.

I still can't say the word goodbye, so I'm just saying, "I'll see you around, guys!" 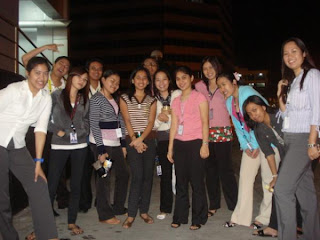