I am one very observant person and it doesn't take much for something to draw my attention or to amaze me.Me and hubby are big Chinese Cuisine fans. For quite a while, we've been frequenting this Chinese dining place, Silver Star, where his father usually buys Pancit. We ordered take out one day, a serving of Lomi, Chopsuey (my favorite), Lemon Chicken and Shanghai Rice, and we became regular customers since then. When we first came there, I immediately noticed an old school cash register. I didn't think it was working until the cashier punched in our order. I wanted to take a picture then but I was hesitant because I thought the cashier was in a foul mood.  I always wanted to take a photo of that old cash register but I didn't have the guts to ask until yesterday. Me and hubby together with our friend Bong decided to have lunch at Silver Star. I told Bong of how I really wanted to have a picture of that register and he just stood up and went to the cashier. He took photos while making short conversation with the cashier. We learned then that the restaurant was built in 1947, it was still a hotel then. Then the hotel was moved upstairs and the restaurant itself was built in 1948 or 1949. The cash register was bought in the 1950s. It's almost 6 decades since the cash register has been bought and it is still working until now. I asked the waitress if the cash register has undergone repairs since it was bought and she said she doesn't know one instance when the cash register has been broken. Amazing, isn't it? 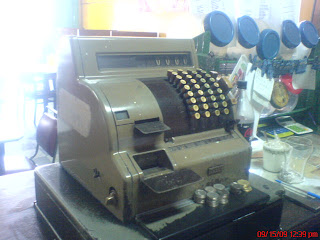 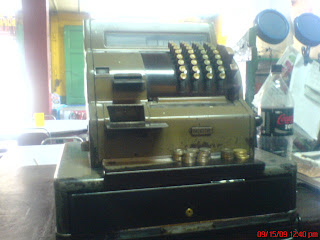