Today is the 30th of July and it is my parent's 30th wedding anniversary. Let me tell you a little of their love story.

On the 22nd day of June, 1946, Vicente Yboa, Jr. was born. The 5th child in a brood of 10, Vicing, as he is fondly called, was raised in Catbalogan, Samar but eventually went to Manila to continue his college education as a Mechanical Engineering student in Mapua. He then applied and got accepted in Koppel, an airconditioning company.

Exactly 9 years after Vicing was born, Divina Tan - Baby as she is lovingly called - was born on June 22, 1955. Also, the 5th child in a brood of 10. She was raised in Pasay City and took up Accountancy in University of the East. Took internship and later got accepted as a regular employee in Koppel.

That's where it all began. Vicing took notice of the tiny girl from the Finance Dept in Koppel. He pursued her, even taking the time to go to UE where Baby was taking classes after work. She didn't feel anything towards the man nine years her senior and used to hide whenever she sees him at the gate of the university. But the man is insistent on getting her affection and eventually his hard work paid off.

July 30, 1979 - they got married at Our Lady of Sorrows Church in Pasay City and started their own family. With 6 children, life then was never easy. There were tuition fees to think of, utility bills that needed to be paid, mortgage payments got delayed. Through it all, they stood beside each other, supporting each other, praying together, never left despite the difficulties they have to face. Time came that it was really a financial crisis that even the most basic need of a human being was never met, education was put on hold, business got bankcrupt, still they remained strong -  for each other, but most importantly for their children.

As they say, there is always a silver lining. With the love and support of every member of the family, they survived. The children finished school, Vicing retired from Koppel, Baby remained a doting mom/wife at home. Life still challenges them but their union has been tested by time and it has remained strong and it will remain strong for all the years to come.

30 long years of love, support, understanding and respect. It is with utmost pride when I say I am the daughter of Vicing and Baby. I am a witness to the long journey of their companionship, I am a living legacy of their undying love for each other and I will be eternally grateful for the way they have raised me and my siblings. I will not choose any other set of parents if I will be given the chance and for me they both truly are "The Best Parents in the World".

Happy 30th Anniversary, Mama and Papa. I love you both. 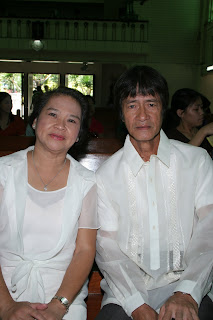