I've read many articles about breastfeeding, I've also talked to moms who are breastfeeding their babies and I knew that I want to do the same with my baby. With the many benefits that breast milk provides for the babies, I know that I am doing what is best for Johan.

After more than two weeks, I'm still doing mixed feeding. I don't think my milk is enough to last the entire day for Johan. I give him a bottle of formula only twice a day and the rest of his feeding is breastfed. His feeding schedule is every 3 hours with 3 ounces of milk. Hopefully, in the coming days I will be able to purely breastfeed Johan and eventually stop giving him formula.

The first day that I expressed milk I only saved barely 2 ounces, not even enough for one feeding. But, eventually my milk quantity increased and I was even able to express more than four ounces of milk in one pumping session. I'm doing manual pumping for now as advised by his pedia since according to her manual pumping will stimulate my breasts to produce more milk.

Yes, I'm a Mama Cow and proud to be one. 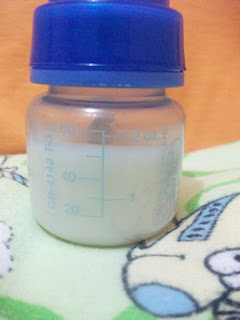 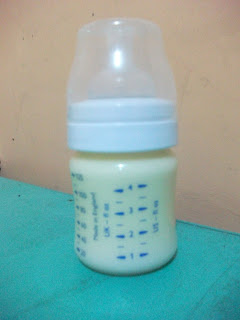 Filled to the brim - more than four ounces of breast milk