Potty Traning - We're Getting There 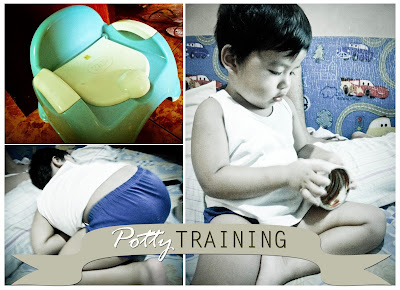 We're starting to potty train the little boy and I would have to say that he's made a lot of progress. At the beginning of the week, I instructed my MIL not to make Johan wear disposable diapers during the day and teach him where he should make "wiwi" and "poopoo". He didn't like not wearing diapers and would put up a fight every time we'll try to make him wear briefs. Eventually, he gave in. During the first day of potty training, Johan wet his briefs, as expected, and peed whenever he needs to regardless of where he is. He hated his potty. We didn't know why. So, his Lola taught him that he either needs to go outside or go to the bathroom instead of going to the potty whenever he needs pee. According to MIL, Johan usually just goes outside but he still wets his briefs because he didn't want to take them off. Hubby would really have to bring Johan with him whenever he needs to do the number one just to show the boy how it should be done.

This morning while I was browsing Pinterest for activity inspirations for the little boy, Johan called out to me, "A-my, wet!" and pointed to his briefs. He just peed without telling me and I didn't hear the front door nor the bathroom door open so I thought he must have peed on the floor somewhere.

So I asked him, "Where did you make wiwi?", to which he answered with, "A-my, come", pulled my hand and brought me outside. He then showed me his potty and boy, was I the proudest Mom when I saw that he indeed peed in the potty! Good job, Johan!

One potty day at a time and I'm sure we'll soon be diaper-free at last!