Johan will turn four in October this year and as early as last year, I already thought it is about time to send him to school. I initially planned to enroll him in a summer class first to see if he's ready but the school didn't open slots for nursery this year. So, by April we both went to the school to have him assessed. 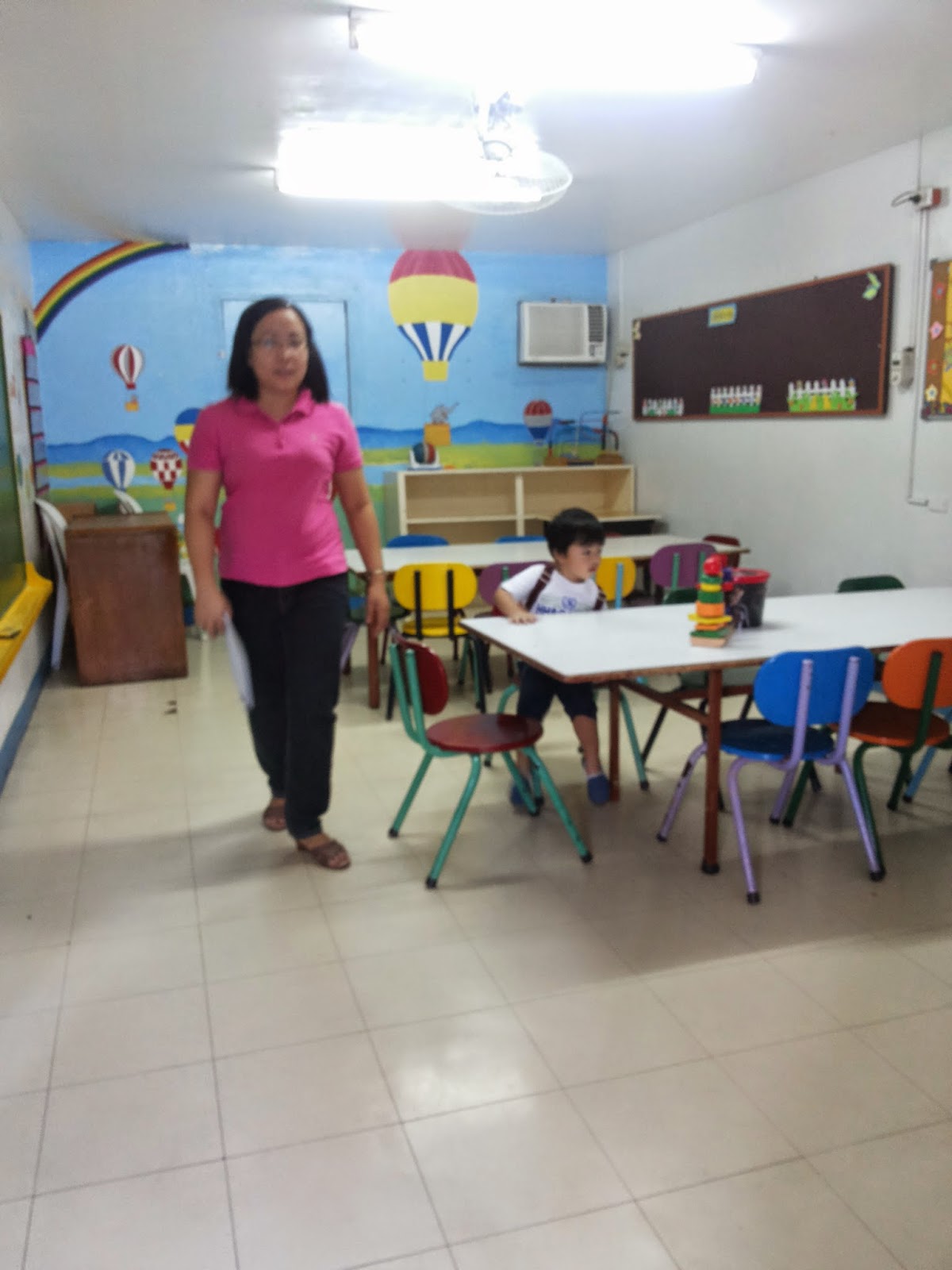 That was taken during Johan's assessment. His behavior surprised me that day as he is usually very clingy to me but he went with the teacher inside the room and didn't cry when the door was closed. I can hear him answering the teacher's questions and when they were done, the teacher told me that Johan was indeed ready for school and even got 95% on his entrance exam!

I waited for a month to pass before I went back to the school to enroll him and paid for his books. A few weeks later, I picked up his books and completed his school supplies.

Come first day of school, everybody is excited! Even my parents and my sister came to Johan's school to show their support for the little boy. They even bought him a cake!

One glitch that almost made me into a monster mom that day - the school failed to inform me and a few other moms of preschoolers that classes for preschool won't begin until two days later. I asked them four times -  twice in person and twice over the phone giving me the same answer that school would start that day. But, when I confronted them about this, they denied that they gave me that answer. Grr!

Anyway, two days later we're back to first-day-of-school mode. The boy was excited, I prepped him really well for school telling him he'll meet a lot of friends, there will be a lot of kids he can play with, they will color and write and paint stuff, etc. etc.

When we arrived in school, the preschoolers are already lining up to go to the classroom. Johan immediately lined up while looking around at the many kids his age. 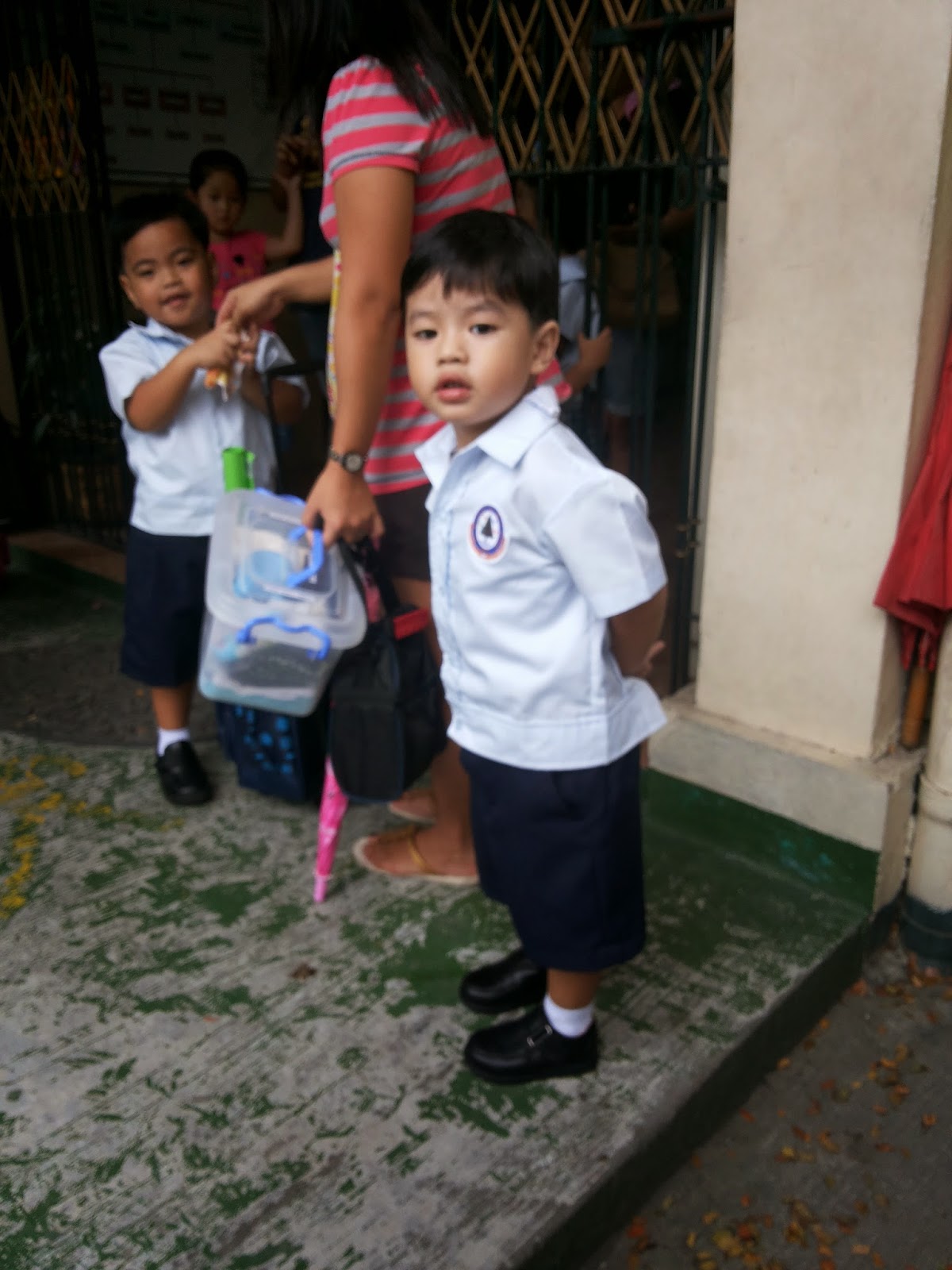 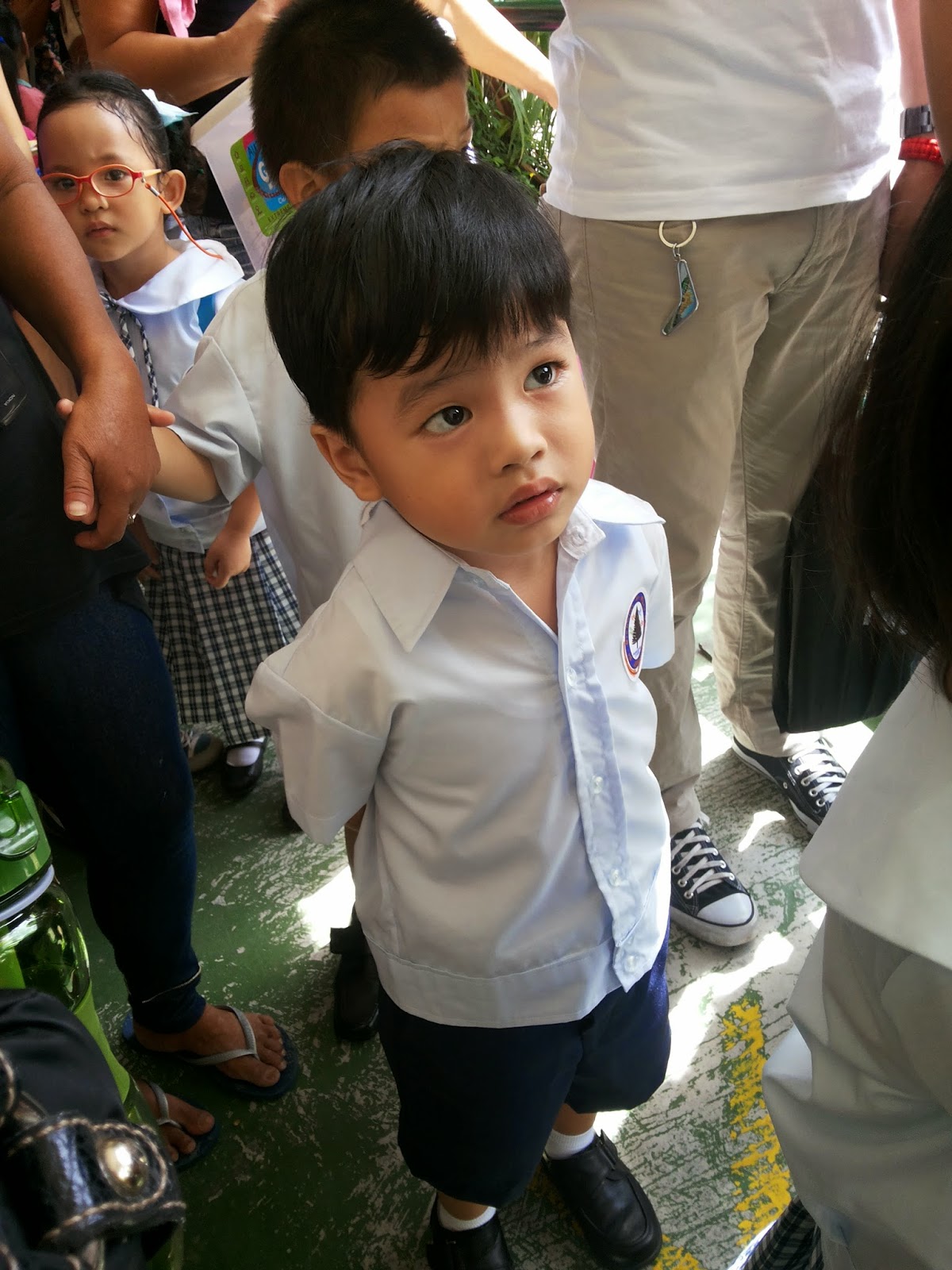 He was well-behaved and I was really proud of him especially when we arrived at his classroom. He immediately went inside and chose a seat. He was all smiles and I was even able to take a few photos. 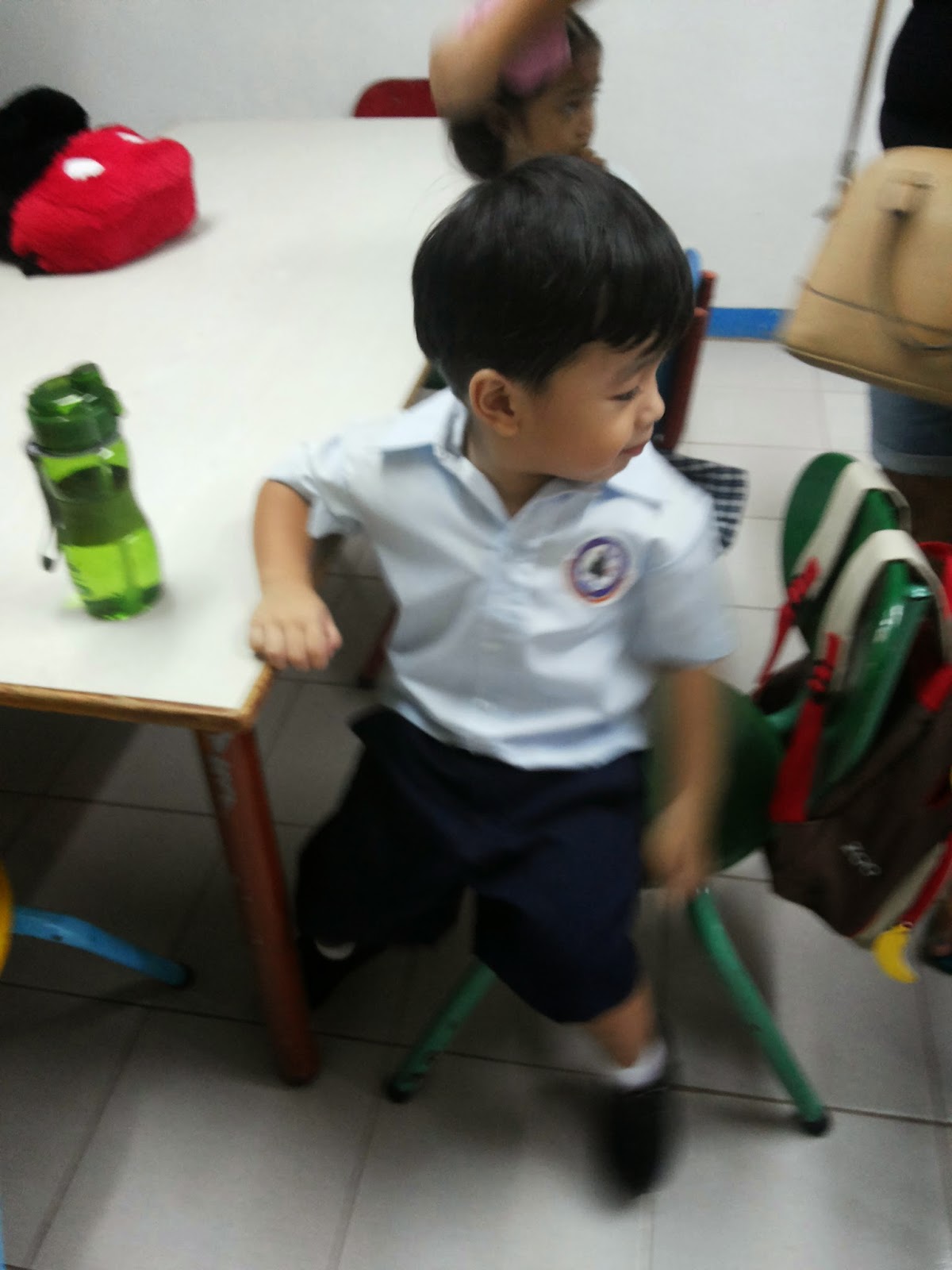 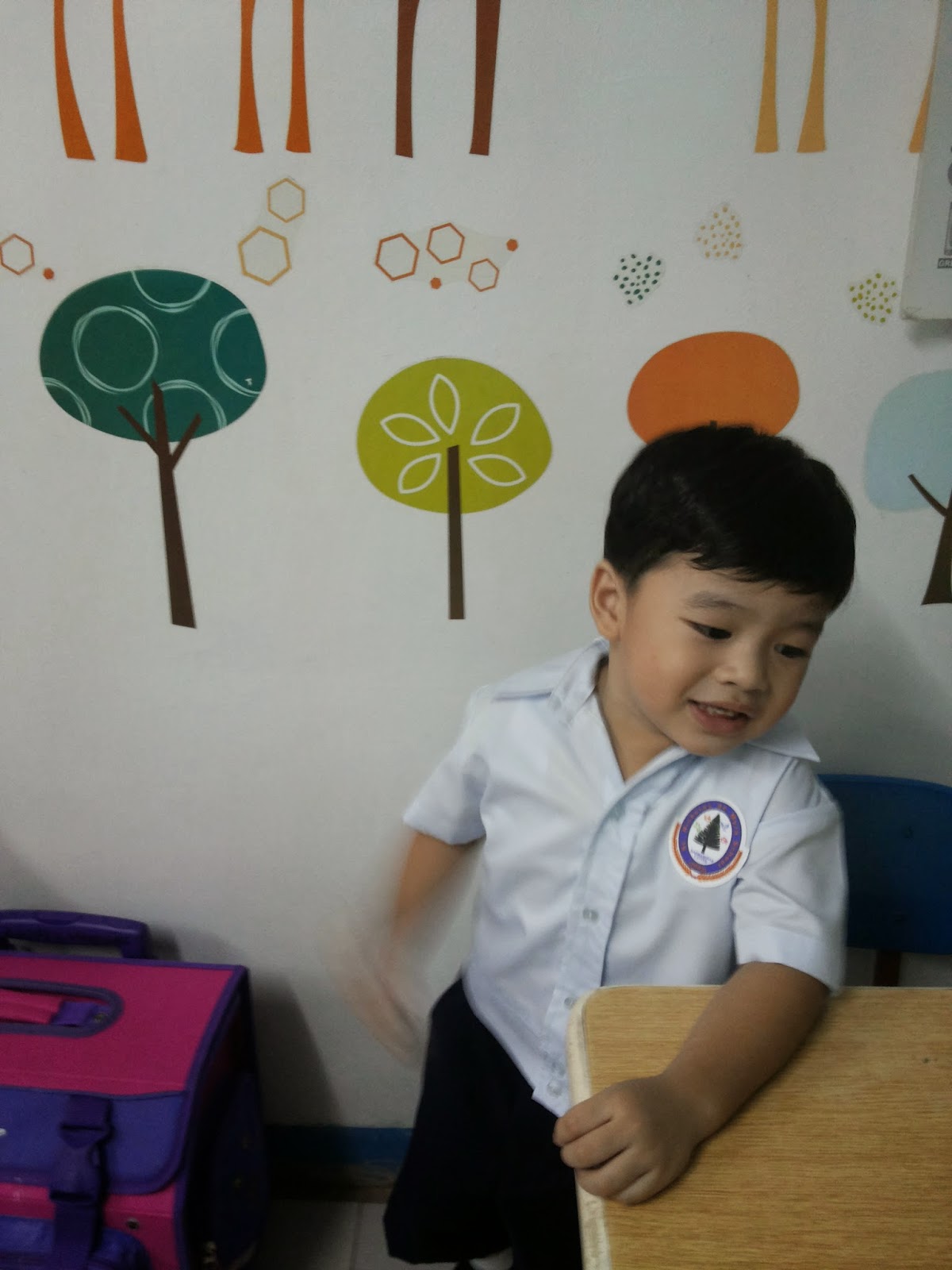 By this time, his teacher is starting to tell the parents that it is time to leave the kids inside and let the teacher and the aide take over. Also, this is the time when the other kids started crying. Johan was still doing a great job, he kissed me, said I love you and see you later. He even waved at me and his Daddy when I was out the door and even gave us the two-thumbs up sign! I was thinking, "Wow, that was pretty easy!"

Or so I thought. Once the classroom door was closed, the kids started wailing! I was standing by the window listening and a few minutes later, I heard Johan crying as well! He was calling out to me and screaming at the top of his lungs! It was heartbreaking, I really wanted to go inside the room to comfort him but then I stopped myself from doing so, knowing that it will just make things worse. But then, when another kid opened the door, I saw Johan being held by the teacher and almost got his fingers crushed when the door was suddenly closed. That's when I told my husband, I am getting him out. So I did and we stayed outside the room until his classes were finished. I know that I should have stood my ground and let the teacher take over but my fear of Johan getting hurt got the best of me. He is only three years old after all.

The next day that Johan went to school, I stayed home. I decided it is best for him to learn that Mommy will be waiting for him at home while he goes to school. It will make adjusting easier as he is more clingy to me than to his Daddy. He still cried and it went on for about a week. But more than a month after his first day, I am very proud to say that my son now goes to school without shedding any tear! He tells me stories everyday when he arrives home, shows me his stamps, we do his homework together and he tells me he likes his Teacher Liza but he likes his Teacher Melai better. Teacher Liza is the actual teacher while Teacher Melai is the teacher's aide, she is the one who carried Johan during the first few days that he's been crying in school.

So far, he's had two quizzes and he got perfect scores on both. He likes school now and even asks me everyday if it's time to prepare for school. There's light at the end of the tunnel after all. Hurray!